Initially established as a build-up to Vancouver’s only Marathon, the First Half started when the Vancouver International Marathon Society approached Pacific Road Runners with the idea of hosting a Half Marathon as a build-up event to the Marathon, hosting the first First Half in 1989 . After 30 successful years with the Pacific Road Runners, the event came full-circle and joined the RUNVAN® family in 2019.

A staple in the Vancouver Running Community

Back in the late 80s, people that ran were mostly hard-core runners. Running clinics were almost unheard of. The Sun Run was just starting to establish itself as a major event. The only specialty running stores in town were Forerunners on 4th Avenue, Rackets & Runners on Oak Street, and the first local Running Room on Georgia Street. With a few exceptions, most races were organized by running clubs to satisfy the needs of these hard-core runners.

Into this environment had come a young upstart called Pacific Road Runners (PRR). With less emphasis on competitive running and more on fitness and fun, the club was rapidly attracting enthusiastic new members. The club quickly established a reputation for well organized, fun and innovative events such as the False Creek Fun Run 10KM and the Twilight Run.

In the fall of 1988, PRR was approached by the Vancouver International Marathon Society RUNVAN®, with the idea of hosting a Half Marathon as a build-up event to the Vancouver Marathon in May. With little hesitation the club agreed. In fact, serious thought was given to staging two half marathons, one in February and a second in March. But the club never got around to organizing the ‘Second Half’.

The club had a number of stated objectives in staging the event:

These objectives served as guiding principles for the Pacific Road Runners in operating the event through 2018. The ‘First Half’ has now come full-cycle, and is organized by the non-profit Vancouver International Marathon Society RUNVAN®.

Of course not everything has gone smoothly:

Pacific Road Runners race directors – Colin Atkinson, Scott Gavin, Heather Moorhouse, Mike Bjelos, Marco Iucolino, Dan Cumming, Nicki Decloux, David Parker and Terry Bushnell – all voluntarily gave enormous amounts of their time to make the First Half such a great race. Thanks also to the collective contributions of many other members and friends of the club, past and present. PRR members put huge energy into the First Half, but the race’s success also relies on the wonderful support of sponsors as well as non-club volunteers who turn out to assist all of the racers, whether they be out to set personal records or simply to be part of an event that has staked out a prominent place in the sporting life and culture of Vancouver.

RUNVAN® is proud to carry this tradition forward.

The First Half 2007 re-reoute went up Prospect Point. 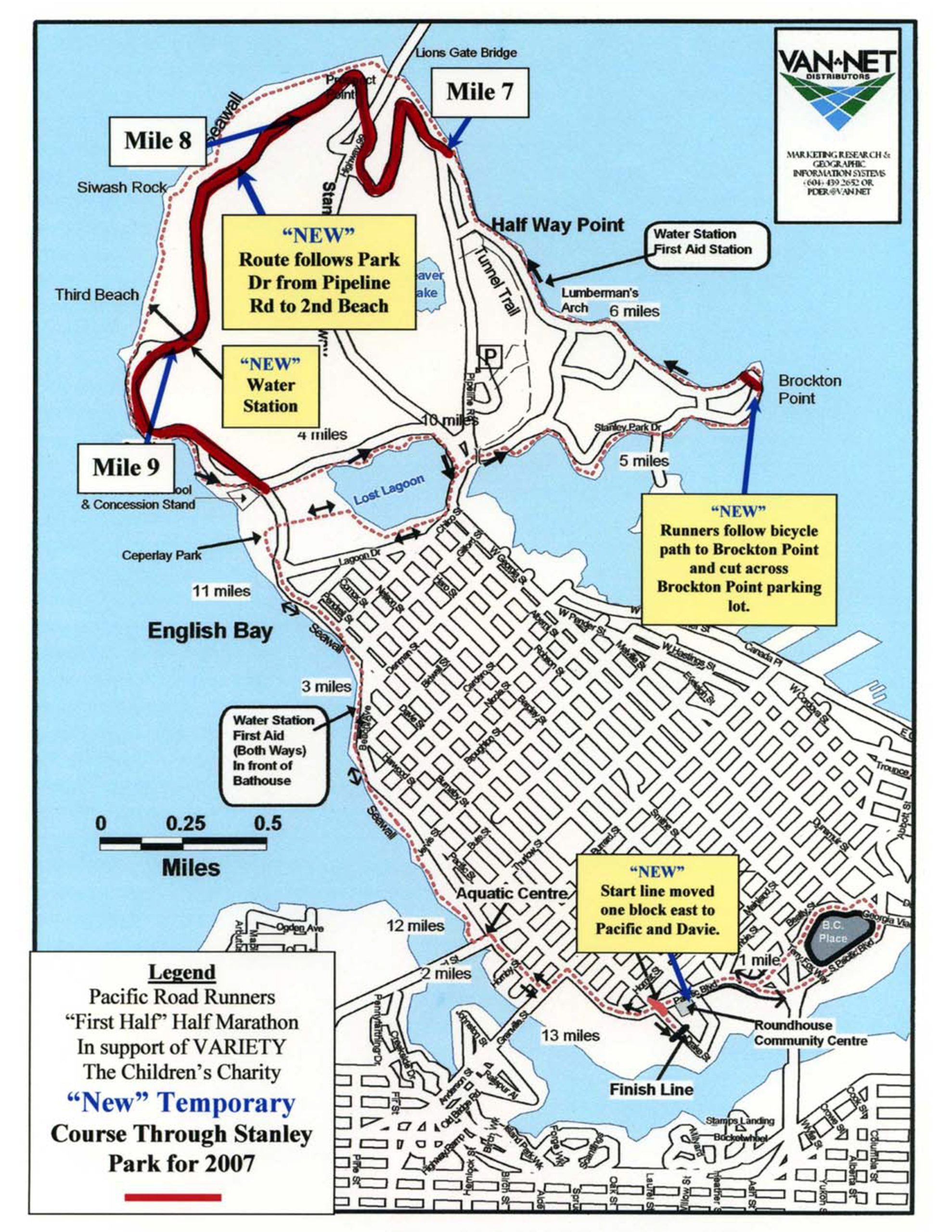 The First Half traditionally is an out-and-back around the Seawall. 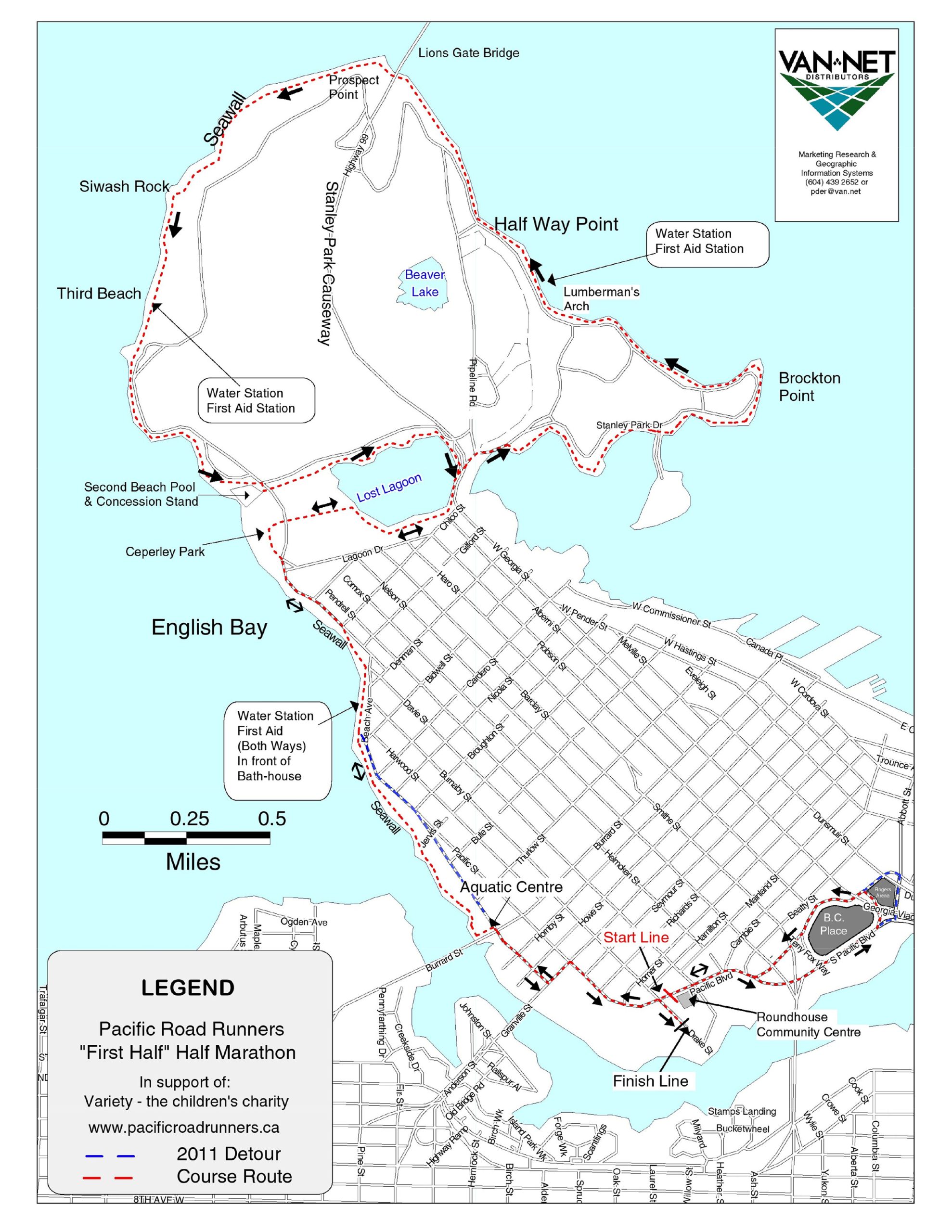 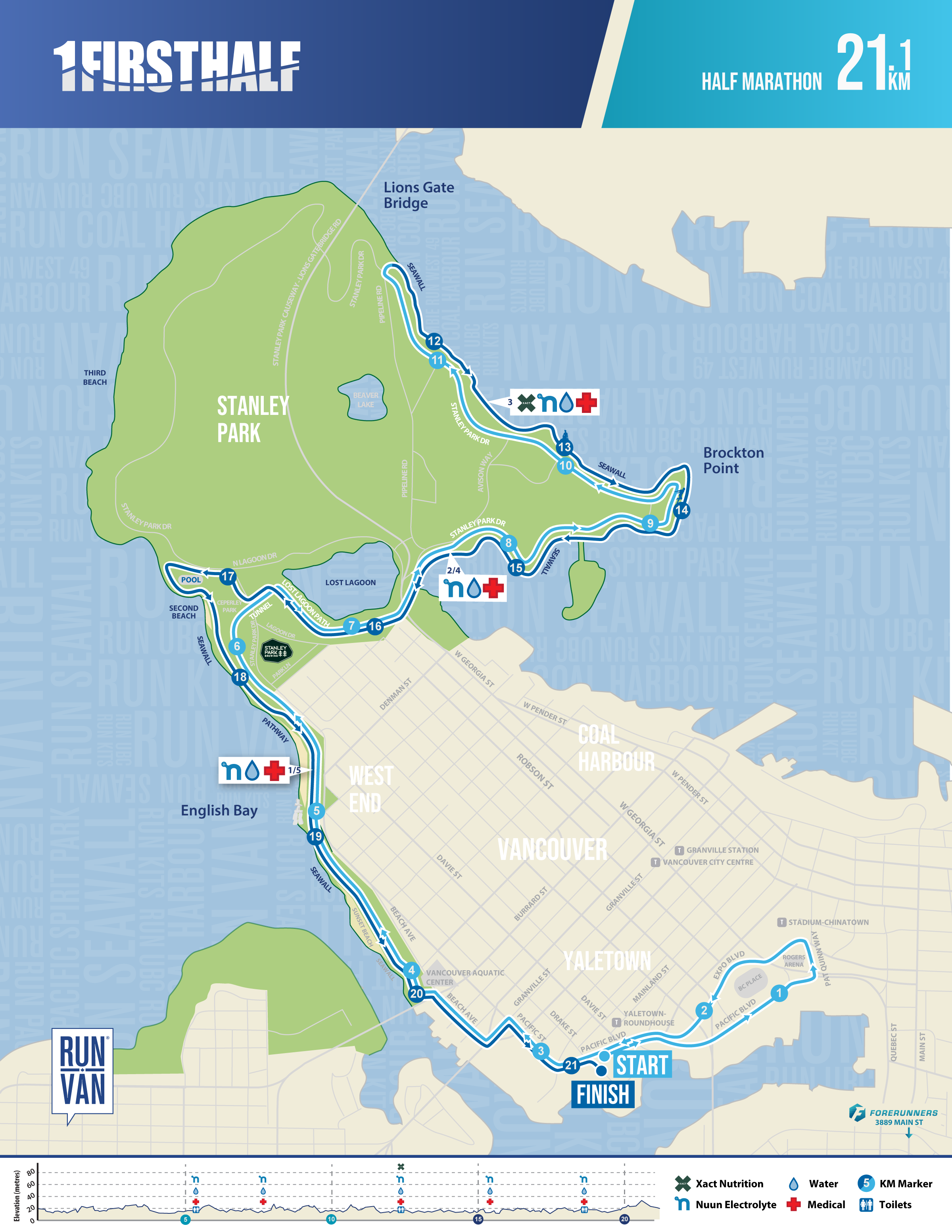 The First Half traditionally is an out-and-back around Vancouver’s famous Stanley Park Seawall.